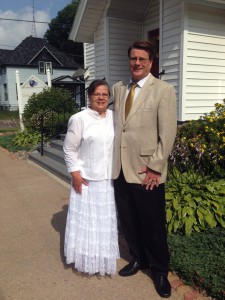 Rev. Gregory and Julia Dorsch are the pastors of the Christ Gospel Church of Antigo, Wisconsin. They first began pastoring here in 2005. Prior to that, they lived in Maine for twenty years. Gregory served in the Air Force from 1976 to 1981 at Loring Air Force Base. After he was honorably discharged, he worked at a local highschool. His family later relocated to Jeffersonville, Indiana for eight years before being called to pastor in Antigo. Outside of their pastoral duties, Rev Dorsch currently works in maintenance at a local nursing home in Wisconsin. His wife Julia works full time at the church. She assists with both secretarial work, along with maintaining the facilities. They first joined Christ Gospel Church in 1979. They have two children and six grandchildren.